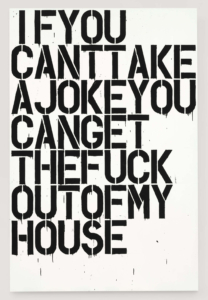 Christopher Wool was born in Boston, USA in 1955.

Wool was raised in Chicago, but moved to New York in 1973 ,where he trained as a painter at the New York Studio School, before dropping out to explore the underground music and film scene.

He was a part-time studio assistant to Joel Shapiro between 1980 – 1984, though it wasn’t until the late 1980’s that Wool began making his now famous ‘word paintings’.

These pieces are made up of large, black, stenciled letters on white backgrounds, normally canvases, and Wool reportedly came up with the concept after seeing graffiti on a brand new white truck.