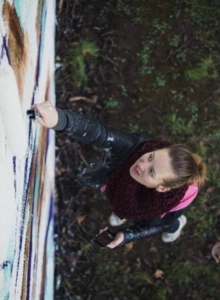 Hannah Adamaszek is an artist who paints her own unique representation of the world around her. Her style being a fine line between ‘street art’ and ‘fine art’.

Born in the UK where she has lived for most of her life, Hannah has been lucky enough to work in Austria, Switzerland and Australia on the ski slopes, but art is her real passion.

Her influences come from all around her, not least the colours, forms, sounds, patterns and pictures she finds on the internet.  Music is also an influence with a number of her works having been inspired by Kyson and Jimi Hendrix.

Hannah trained at Bournemouth Arts Institute graduating with a Degree in Fine Art, and has exhibited across the world with many renowned art galleries.

Hannah has achieved rising star status very swiftly in the urban art scene.  She has painted at the acclaimed Stroke Urban Art Fair in Berlin, exhibited at the OM Yoga Show in 2017 and has been mentioned in publications such as Elle, The Guardian and Free People.

Her work has been placed in private & commercial collections and is extremely sought after by art collectors all over the globe.