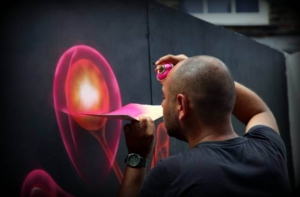 After attaining an architecture degree in Concepción, Chile – Otto Schade came to England in 2005 and began his career as an urban sculptor.

Combining his love for architecture and art, Otto began painting creative pieces with one-of-a-kind urban contemporary themes. He cites the inspiration for his passion for painting as the old surrealist masters: Giger, Magritte, Dali and Beksiński.

Originally starting with oil paint on canvas, Otto explored various styles and mediums from collages, to illustrations, to stencil free-hand spray paint on canvas and walls, and very quickly made his mark on the street art scene.

Otto painted pieces boasting a sharp and ironic twist. While communicating anti-war themes along with his trademark ribbon style, he earned a street cred name, Osch, in London’s district of Shoreditch, which is where Stopwatch Gallery first discovered his work.

Since then, Otto’s art has gone global. He has participated in some of the biggest art festivals, including “Sand, Sea and Spray” in Blackpool, “City of Colors” in Birmingham, “Upfest” in Bristol, and “Hometown” in Berlin. Otto’s pieces have been exhibited in the USA, South America, Africa, Asia and many cities across Europe.

The demand for Otto’s unique pieces of art continues. In 2018 alone, he participated in two art exhibitions – one in Berlin, Germany and one in Paris, France – and had the opportunity to paint in the following cities: Miami, New York City, Denver, Lisbon, Paris, Amsterdam, Berlin, Munich, Santiago and in December 2018, Otto painted a mural in Jamaica!

The eclectic works of Otto Schade can be found on the streets of many European cities – including Berlin, Amsterdam, Moscow, Paris, Barcelona, Porto, Luxembourg, Stockholm, Gothenburg, Brussels,  and London – and can be viewed in various galleries and exhibition centres across Europe.

Otto is available for commissions for art collectors, fashion designers, interior designers and other creative projects.

Boo Who?
Scroll to top