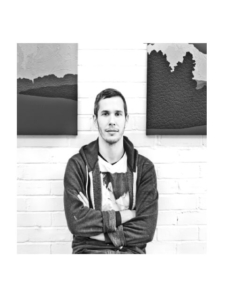 David Wightman is a British painter and printmaker based in London, UK. He creates beautiful paintings and prints of fictional landscapes. He studied Fine Art at Middlesex University and gained an MA in Painting from the Royal College of Art, London.

David Wightman’s career has seen his work exhibited in many solo exhibitions including My Atalanta, Long & Ryle, London (2020), En Arcadie / In Arcadia, Duran | Mashaal Gallery, Montréal (2018), A Devotion, Someth1ng Gallery, London (2018), EMPIRE, Long & Ryle, London (2016), New paintings + Akris collaboration, Akris, 30 Old Bond Street, London. In 2010, David was awarded the Berwick Gymnasium Arts Fellowship – a six-month residency in Berwick-upon-Tweed, Northumberland, funded by Arts Council England and English Heritage. In 2013, he was selected by the curator of House Arts Festival, Mariele Neudecker, to make a site-specific painting for a disused pavilion on Brighton’s seafront. The commission was funded by Arts Council England. In 2014, Wightman collaborated with the fashion label Akris for their Fall / Winter 2014/15 collection.

His work has featured in Harper’s Bazaar, The Guardian, The Times, The Telegraph, The Financial Times, The World of Interiors, and Money Week.