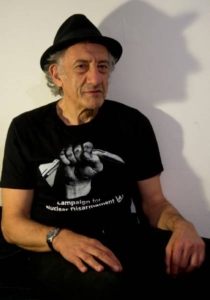 Born in London, England in 1949, Peter Kennard is a photomontage artist.  He moved away from painting to better align with his political views and to reflect his involvement in the anti-Vietnam War movement.

He is a highly respected artist and is collected by museums, art galleries and private individuals globally. Here are what a few of his admirers had to say:

This is what I thought when I saw your work: It is as if we have learnt nothing. They wrap themselves up in words like ‘freedom’ and ‘democracy’ and drape themselves in our flags with no concept of where these things have come from and what they really mean (hijacked for their own short- term political gain). History is endlessly doomed to repeat itself as the dead are forgotten and the past deteriorates beyond all recognition. We have forgotten how we got here’.

‘Peter Kennard has been producing his politically radical photomontages for 50 years.  We need people who carry on fighting the good fight. People who keep their focus despite the changing cultural and political landscape. The message is consistent – themessage is clear – the message is true. The message is uncompromising, brutal and hard-hitting – but also very beautiful, it’s beautiful because it wants to keep us alive. It’s a jolt of electricity. A shot in the arm. A kick up the backside. You know what? It’s a wake-up call’.