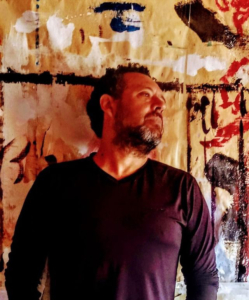 Alejandro Naranjo was born in 1972 in Colombia.

His favourite medium is painting in an expressionist style where he freely shares fleeting, fragile, and lyrical stories.

Inspired by life
Alejandro Naranjo felt from an early age the desire to express himself through art. In the beginning, he decided to study Fine Arts at the Metropolitan Technological Institute in Medellín, Colombia. Then he obtained his Bachelor’s Degree in Fine Arts and Fine Arts Education at The University of Antioquia, in Medellín, Colombia. His most recent theme is life, as a metaphor for what exists in the days of our life and in the landscape we inhabit.

His paintings
Alejandro Naranjo paints and draws images capable of creating a dialogue that goes beyond verbal language. They are made on paper and canvas and with different techniques such as oil and graphite, and sometimes, textures, lines, strokes, creating forms, making it possible for his painting to exist between the language of abstractionism and figurativism.

Selected exhibitions
Alejandro Naranjo obtained in 2008 the third prize in the XVI Departmental Hall of Arts for art teachers, in Medellín, Colombia. In 2005 he participated in the Hong Kong festival organised by the Latin American Group of Consulates. He exhibited in 2011 at the Gwanghwamun International Art Festival in South Korea and in 2014 he exhibited at the Red Dot Gallery in California in the United States, amongst many others.