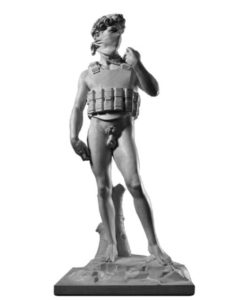 Banksy is the pseudonym of a “guerrilla” artist known for his controversial, and often politically themed, stencilled pieces.  His identity remains unknown, but he is believed to be from Bristol, England.

Banksy’s career began in the early 1990’s, as a graffiti artist and member in Bristol’s graffiti gang “DryBreadZ Crew”.  Although his early work was largely freehand, Banksy used stencils on occasion.

In the late ’90s, he began using stencils predominantly, because most of the preparatory work can be done off-site.  It has been said that he made the decision to use stencils when he saw one on the underside of a train while hiding from the police.